As Aston Villa’s impressive start under boss Unai Emery continues, Boubacar Kamara’s influence grows and his class continues to come to the fore.

Villa have secured 13 points in Emery’s first six Premier League games in charge, and as we continue to move towards the top half of the table, there is optimism and excitement over what he is building but also the humility to know that we have a lot of improvement to still make.

Emery will be the first to accept that and is undoubtedly working tirelessly on implementing his ideas and style of play to continue to see Villa evolve and develop into a side that can compete at the top level.

A key part of that process will be backing him in the transfer market, to bring in his own players who will be better suited to his philosophy. However, there are already key individuals in the group who are showing that they will be fundamental in our progression under the Spanish tactician.

Kamara once again put in a Man of the Match performance in our win over Leeds Utd on Friday night, showcasing his quality and class in both phases of the game to play a leading role in the victory.

With 69 touches of the ball, he provided an assist, had 80% passing completion, won eight of nine duels, made two clearances, blocked two shots, made three key tackles and wasn’t dribbled past once in the encounter.

Beyond the numbers though, the highlights package put together by Villa in their tweet below just shows the elite level of talent he has. He has physical attributes that make him special, but his reading of the game, his intelligence on the pitch, his positioning, vision and understanding makes him a stand-out player on a regular basis.

Your #AVLLEE Man of the Match, presented by Castore…

Combining an ability to provide defensive protection for the Villa backline, with his talent to help build attacks and break forward to provide an attacking threat makes him the all-round midfielder. The fact that he’s still only just 23 years of age means we’ll see him improve further still.

An interesting tactical point which we might see emerge more prominently in the coming weeks with Alex Moreno starting at left-back, is reflected in Kamara’s heat map vs Leeds below. 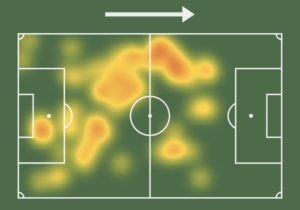 With the Spaniard bombing forward down the left flank to provide width and an attacking outlet, Kamara may well drift to that side to cover the space he vacates and provide us with cover, but it’s still quite an advanced position so that he can be influential in our build-up play.

Both him and Douglas Luiz will need to give us a foothold in midfield to allow our attacking talents to impact the game, and their partnership has been another big plus point under Emery thus far. They appear to complement each other well and are building a good chemistry and understanding in the heart of the side, and that will be imperative in us controlling possession and the tempo of a game, as Emery wants.

There’s a lot of positives for Villa and Emery currently, and it’s hoped we continue to build on those. Crucial to our ongoing progress though is Kamara’s form, and beyond the importance of what he brings to the team, it’s just a joy at times to watch him operate and almost effortlessly control things in our midfield.