Aston Villa travel to Turf Moor to face Burnley in the Premier League this weekend, with Tim Iroegbunam in line to keep his place in the starting XI.

After a much-needed clean sheet and draw at Leicester City, Villa finally got back to winning ways last time out with a 2-0 win over Norwich City.

That subsequently ended a six-game winless streak, and so Steven Gerrard will hope that his side can continue to build on that momentum as we look to secure a top-half finish in the Premier League this season.

Given Burnley are in fine form as they continue to fight off the threat of relegation, this will no doubt be a real test for Villa both in terms of it being a physical encounter as well as trying to produce enough quality to get the better of the home side.

In turn, Gerrard will need to think carefully about the starting line-up that he selects, as it’s imperative that we start well and take command of the game to put ourselves in the best possible position to return home with all three points.

Iroegbunam deserves to retain spot, time for Buendia to get chance

After another clean sheet last time out, the expectation is that Villa will go with the same backline as last weekend with Lucas Digne, Tyrone Mings, Calum Chambers and Matty Cash in front of Emiliano Martinez,

Similarly, having finally shown an ability to have a physical presence and protection in midfield, Gerrard will perhaps be tempted to remain unchanged in that department too with Jacob Ramsey, Tim Iroegbunam and John McGinn giving us energy, physicality and technical quality.

It would certainly be a shame to see Iroegbunam drop out of the side after he impressed in his first full start at senior level, and it will be a crucial part of his ongoing development for him to gain experience in games like this.

While that could result in a largely unchanged XI, Gerrard will be forced into one switch to his Villa line-up with Leon Bailey sustaining an injury and being replaced in the first half against Norwich.

With Danny Ings contributing four assists and two goals in his last six games, taking his overall tallies to six goals and assists apiece in 26 appearances this season, he will feel as though he deserves to be back in the XI this weekend against his former side.

As we continue to see positive signs in his partnership with Ollie Watkins, it would arguably be the smart option to play them both up top, and with Philippe Coutinho struggling to have a decisive influence in recent weeks, it has to be time for Emiliano Buendia to get another chance from the off in the No.10 role behind them.

The Argentine playmaker has been very effective off the bench in the last couple of games, and particularly in a game where we’ll need his energy and work ethic off the ball too, it seems a no-brainer to draft him into the Villa starting line-up against Burnley as we look to continue our ascent up the table. 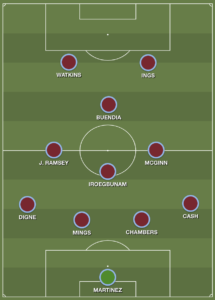