Aston Villa take on Chelsea this weekend and Dean Smith is expected to make changes with Leon Bailey and Ollie Watkins coming back into the XI.

Villa struggled with a disrupted pre-season schedule before being hit with injury blows and Covid issues through the first three Premier League games of the campaign.

With the international break now concluded, Smith has welcomed most of his squad back to Bodymoor Heath to prepare for the encounter with Chelsea, and he offered positive updates across the board in his press conference on Friday as a number of key individuals should return.

So, how might the Villa XI look on Saturday evening at Stamford Bridge?

No Martinez, Konsa a doubt

Emiliano Martinez will not feature as he is currently quarantining after travelling for international duty, and so Jed Steer will come into the side for a rare start.

Matty Cash and Matt Targett could get the nod in the full-back roles with Ashley Young perhaps preferred in place of the latter, while Tyrone Mings featured for England over the break and has recovered from the cracked rib that ruled him out against Brentford.

There is one doubt though as Smith didn’t offer much on Ezri Konsa’s status after he was forced off in the latter stages against Brentford with a knee issue. Konsa was spotted in training on Thursday with taping on his knee, and so time will tell if he is able to recover.

McGinn and Ramsey available in midfield

Both John McGinn and Jacob Ramsey were missing last time out having had to adhere to Covid regulations, but with McGinn featuring for Scotland this past week and Smith confirming Ramsey is available again too, the pair will both be pushing for an immediate return to the starting XI.

Morgan Sanson got 45 minutes in his legs for the U23s last week and so he’ll be hoping to feature at some stage, but with Douglas Luiz rested over the break and McGinn returning, it could be difficult for the Frenchman to get the nod.

With Smith confirming that both Ollie Watkins and Leon Bailey are ready to return, the attacking duo could come straight into the line-up, particularly the latter given Emiliano Buendia’s absence.

Bertrand Traore is also in contention, but Smith sounded especially optimistic on Bailey and so he’ll likely occupy a role on one of the wings.

Should Watkins come back in, that could push Ings into a role behind him with the flexibility to interchange right across the frontline, and so it will be fascinating to see how that works and how our attacking unit gel on the pitch, provided the XI below is what Smith goes with. 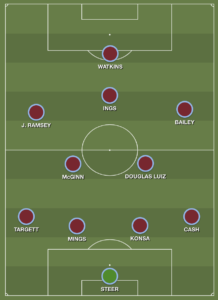