Aston Villa travel to Goodison Park to face Everton on Saturday, with Steven Gerrard keen to build on our draw with Man Utd last time out.

After making a slow start, Villa’s strong finish to secure a share of the spoils last weekend will hopefully have buoyed the group and given us confidence and belief in our own ability.

READ MORE: Why Emi Martinez’s Villa contract extension is such a significant move

Villa now face a run of games against sides in and around us in the Premier League table, and so it’s imperative that we find some form and start stringing wins together and in turn start climbing the standings to get closer to where we want to be.

"He really showed the level of player he is and the pedigree that we've brought in." 💪

Steven Gerrard caught up with the media this morning ahead of #EVEAVL. 🗣️

It won’t be easy this weekend with Duncan Ferguson taking temporary charge of the Toffees after Rafa Benitez’s sacking, and so Everton will no doubt produce a reaction for their new boss with Villa and Gerrard having to be ready to face that.

Villa may well be forced into a change in defence with doubts over Ezri Konsa heading into the weekend after he picked up a knock to his hip against Man Utd.

The 24-year-old was forced off at half-time with that injury despite his best efforts to run it off, and so it remains to be seen if he’s ready to go this weekend. If not, fresh from signing his contract extension this week, Kortney Hause will be on hand to step in and replace his teammate in the heart of the Villa defence alongside Tyrone Mings.

Elsewhere, John McGinn returns from suspension and will likely come straight back into the side, with Gerrard needing to make a decision on Philippe Coutinho in terms of whether or not the Brazilian playmaker is ready for a start.

Having benefitted from a full week’s training, Coutinho will no doubt be feeling sharper and fitter after making a big impact on his Villa debut with the equaliser against Utd, but whether or not it’s enough for him to be deemed match fit is a big call that Villa have to get right in order to make the best possible start in this encounter.

If it’s decided that our January loan recruit isn’t quite there yet, Morgan Sanson could keep his place in midfield, with Jacob Ramsey pushed further up on the left flank to support Emiliano Buendia and Ollie Watkins in the final third.

It’s hoped that it is indeed Watkins who leads the Villa line, with his defensive work, movement and eye for goal making him an ideal option for this one, while he will have good memories from his previous trip to Goodison Park having scored in a win for Villa last season.

That is perhaps the only uncertainty with the Villa XI to start at Everton, with the rest of the side picking itself provided that there are no late injury or health concerns, and it’s a line-up that will be confident in getting a positive result as we look to kick on and enjoy a strong second half of the campaign. 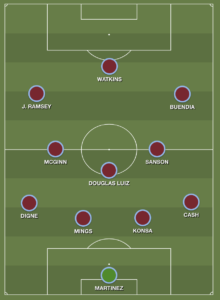