Aston Villa return to Premier League action on Wednesday night as we host Leeds Utd in an important clash for Steven Gerrard and his men.

Having had the break to work on things at the training ground and not only help improve the squad but also to get his ideas and identity across, Gerrard will undoubtedly have relished the opportunity to work with his players for a longer period of time without the pressure of an upcoming game.

With that in mind, it’s vital that we build on the win over Everton last time out and continue to move in the right direction, but it certainly won’t be easy to do that against a Leeds side that sits just four points and four places below us in the Premier League table.

Having missed the friendly against Molde on Saturday, it’s unclear at this stage if Ezri Konsa was absent due to injury or perhaps wasn’t risked having overcome a knock to his hip to feature against Everton prior to the break.

Gerrard will likely provide more clarification on that in his press conference on Tuesday, and so it’s hoped that Konsa is given the green light to feature having been so crucial in our backline again so far this season.

That doubt aside, Villa could go with the same XI that secured all three points at Goodison Park, with our South American contingent expected to be well rested and fully fit having travelled back in plenty of time.

Emiliano Martinez, Emiliano Buendia and Philippe Coutinho were all in action for Argentina and Brazil respectively over the past week, and so they’ll be looking to build on their efforts on their travels and play an important role in this encounter.

Coutinho was on the mark for Brazil with a stunning long-range effort in their second World Cup qualifier of the break, while Martinez was decisive in both games to help Argentina qualify as Buendia made his senior debut for the Albiceleste.

With that in mind, the trio should all be in high spirits, and it’s hoped that they can be influential in a win for Villa.

Gerrard arguably does have one important decisions to make as to whether Ollie Watkins keeps his place up front or if Danny Ings gets the nod, while the rest of the side seemingly picks itself depending on whether or not there any late injury or health issues.

Both Marvelous Nakamba and Leon Bailey are still sidelined, while Bertrand Traore and Trezeguet won’t be involved having still been on international duty this week at the AFCON.

In turn, Villa’s starting line-up is fairly certain at this stage, and the hope is that we perform well enough to pick up another key win to put us on the right path heading into the last stretch of the campaign. 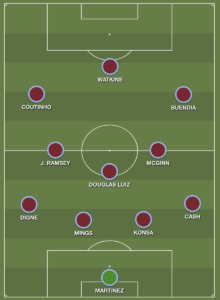