Aston Villa host Man Utd on Saturday evening with Lucas Digne and Philippe Coutinho hoping to make their debuts for the club.

Both men were signed this week in a double boost for Villa boss Steven Gerrard, who has been given the chance to start stamping his identity and mark on the squad that he inherited.

READ MORE: Why Bissouma is the missing piece for Villa as reinforcements arrive for Gerrard

Fresh from our defeat at Old Trafford in the FA Cup on Monday night, Villa will be hoping to bounce back and exact a sort of revenge on the Red Devils, as while our performances have been promising and positive for several weeks now, we’ve not quite been getting the results as a reward for that good work.

In turn, this is an important game for us both in terms of winning against top opposition, but also to hopefully now spark an important good run of form setting us up for the second half of the Premier League campaign.

One change that is certain for Villa this weekend is forced by John McGinn being suspended for this encounter, and so it’s hoped that results in a straight swap for Morgan Sanson.

The Frenchman was impressive against Chelsea last time he started a game, and so there shouldn’t be any hesitation from Gerrard to throw him back into the Villa XI for this clash as he will hopefully give us a foothold in midfield and win that particular battle to set us up for a positive result.

As per Gerrard in his press conference on Friday, it does sound as though Digne is in a good place and will be in contention for a starting spot having been training and playing with Everton in recent weeks.

That in turn could result in Matt Targett dropping to the bench, but time will tell if the Villa boss is ready to throw his new signing straight into the mix with only a few days of training with his new teammates behind him to develop an understanding with the rest of the backline.

Nevertheless, given the experience and pedigree that Digne has built up over the course of his career both at club and International level, it isn’t expected to be too much of an issue.

Elsewhere, Gerrard also suggested that while Coutinho has come through training this week with no problems, he is still lacking match fitness and sharpness, and so that would hint at a place on the bench for this one as he looks to steadily get back to optimal condition.

The Brazilian international will be desperate to get on the pitch and make his debut for the club in front of a packed Villa Park, and it’s hoped that he can be an influential change, if it is indeed decided that he hasn’t got a start in his legs.

Elsewhere, it could be very much as you were from Monday, with the rest of the starting line-up largely picking itself at this point on either current form or a lack of alternative options available.

Having caused Utd so many problems earlier in the week in what was a really promising performance, it’s hoped that Villa can replicate that on Saturday but not only stay switched on defensively and keep a clean sheet, but also show a more ruthless side to our game in the final third and in front of goal to put any chances we create away. 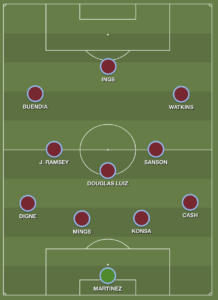