Aston Villa host Man Utd at Villa Park on Sunday afternoon looking to end a 16-year run without a win at home in the league against the Red Devils.

Villa have to go back to August 19, 1995 for the last time we defeated this weekend’s visitors at home in the league, as we’ve really struggled to get the better of them.

Dean Smith will be hoping that barren streak is ended on Sunday, but we’ll certainly have to be at our best in order for that to come to fruition.

As confirmed in his press conference on Friday, Smith noted that captain Jack Grealish remains out with a shin injury, although he’s expected to return to training this weekend and could be in line to make his long-awaited comeback against Everton or Crystal Palace.

Having seen off Everton in our last outing, Smith is likely to avoid making any unnecessary changes and could stick with a winning formula as seen in the graphic below, with no changes being made.

Matty Cash returned from suspension last time out and will again form part of the usual backline in front of Emiliano Martinez, while Douglas Luiz and John McGinn will occupy the deeper-lying midfield roles.

After a much-improved performance in attack at Goodison Park, it makes sense to give Bertrand Traore, Ross Barkley and Anwar El Ghazi a chance to build on that this weekend, and they are expected to support Ollie Watkins who continues to lead our line brilliantly.

Morgan Sanson and Trezeguet remain sidelined by injury too, and so it will be intriguing to see how many of the youth players at the club get a chance to gain matchday experience and make the bench for this one. 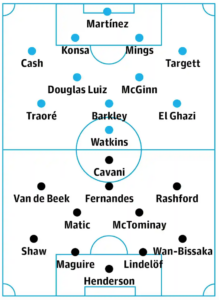 Image courtesy of The Guardian.

As for Utd, they’ve had a quick turnaround after booking their spot in the Europa League final on Thursday night, while they face Leicester City and Liverpool next week. In turn, Ole Gunnar Solskjaer could rotate and manage his squad here, with changes potentially on the cards.

However, the visitors haven’t lost in 24 Premier League away games now, while they’re undefeated in 36 of the last 38 meetings with Villa across all competitions.

They’ve also kept a clean sheet in five of their last seven away games in the league, and given there’s been under 2.5 goals scored in six of their last seven outings away from home, this could be a close encounter with a bit of quality making the difference.

That all doesn’t sound particularly promising from a Villa perspective, but we have to end this run sooner or later, and with our own outside chance of Europa League football next season still in play, we’ll no doubt be gunning for all three points to continue building momentum towards a positive end to the campaign.