Aston Villa travel to north London to face Tottenham on Sunday, with Dean Smith expected to stick with the side that defeated Man Utd last weekend.

Villa have been in fine form over the last few games, winning back-to-back Premier League outings against Everton and Utd, while keeping consecutive clean sheets in the process too.

In turn, it’s hoped that we can maintain the standard that has been set, as although Spurs have had their troubles so far this season, they still have the quality in their side to win this game.

Given the results in our last two league games, Smith is likely to stick with the 3-5-2 system, especially as it appears to be working particularly well away from home against the top sides.

That ultimately makes his decision-making easier, with both Leon Bailey and Morgan Sanson also still sidelined, as per the Villa boss in his press conference on Friday, and so it’s widely expected that he will go with the same XI that won at Old Trafford last time out.

Aside from scoring the winning goal, Kortney Hause was superb in that game, and that followed an impressive outing against Chelsea in the Carabao Cup.

In turn, it would be harsh to see him drop out off the back of those performances, and so Axel Tuanzebe may well have to settle for a place on the bench for this one.

With no other fresh injury concerns, Emiliano Martinez will likely have Tyrone Mings, Hause and Ezri Konsa ahead of him in defence, with Matt Targett, Douglas Luiz, Jacob Ramsey, John McGinn and Matty Cash forming the five across midfield.

That means Ollie Watkins and Danny Ings will get another chance to show that their partnership is developing, with the likes of Emiliano Buendia, Bertrand Traore and Cameron Archer all available off the bench to change the game in our favour if necessary.

It sets up an intriguing encounter at the Tottenham Hotspur Stadium, one that a confident Villa side will believe that they can get a result from as we look to show consistency and meet the level of expectation which is rising with our good form. 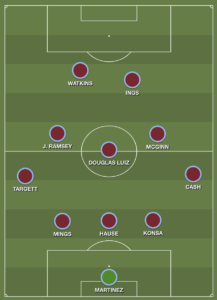