It was a disappointing start to the new Premier League season for Aston Villa, as we slipped to a 3-2 defeat to Watford at Vicarage Road on Saturday.

Expectation and optimism were high after our summer recruitment drive, but on the basis of this performance, it might take some time for the squad to settle and find their feet.

Particularly in the first half, Villa were simply not at the races and were duly punished as we slipped to a 3-0 deficit with just over 20 minutes to go. While a late fightback did draw some positives out of an otherwise desperately poor afternoon, Dean Smith has plenty to think about ahead of Newcastle Utd’s visit to Villa Park next weekend.

While question marks could be raised over the personnel, the system ultimately didn’t work in the first half as Ismaila Sarr and Watford overran us in midfield and hurt us on the counter attack on multiple occasions.

It became apparent very quickly that Matt Targett had his work cut out for him as Sarr was causing him all sorts of issues in the early stages.

Unfortunately, he couldn’t get a grip on his opponent and Smith opted to not change it with little protection being offered by Ashley Young in terms of dropping back and putting numbers on Sarr.

As seen in the two images below taken before the opening two Watford goals, Sarr has broken free down the right wing with Targett nowhere near him to block off his attacks. These weren’t the only two examples of that in the first half, while the first also highlights the lack of cohesion and solidity in our midfield.

After losing possession high up the pitch, John McGinn and Marvelous Nakamba are stretched and have been bypassed in midfield in the space of a couple of passes. If Villa don’t protect the backline better, we could be left exposed and vulnerable all season. 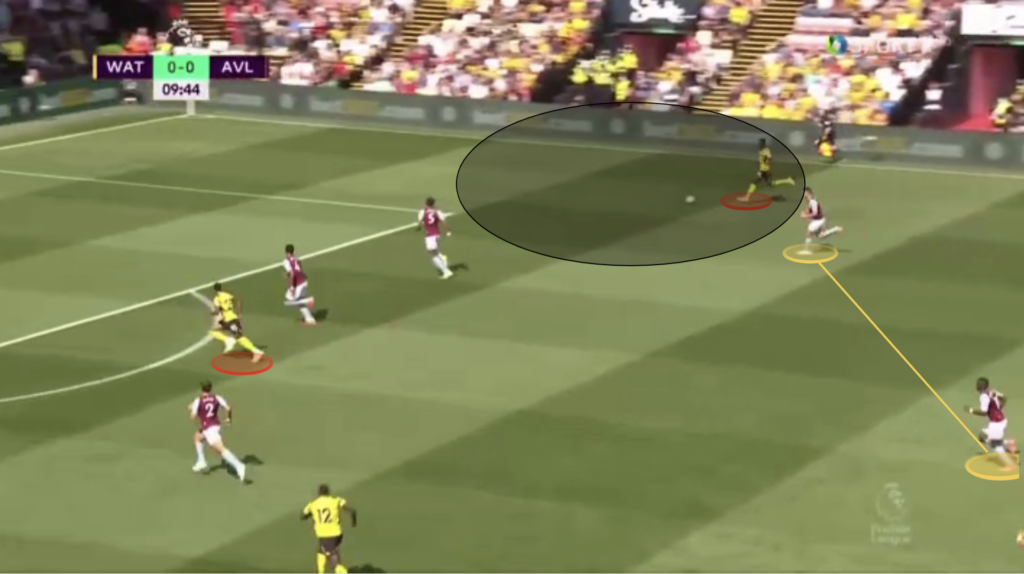 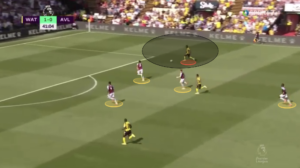 As seen in the images below, Villa didn’t have a great deal of width during the game and by playing so narrow, it created dangerous scenarios in which we were crowded out through the middle, lost possession and were left exposed on the counter attack.

That resulted in Watford’s first two goals in the first half, and as per the second image below, a significant number of our completed passes were between the back four who struggled to get it into feet of our attacking players.

There were some positive switches of play to the opposite flank which opened things up a bit, but overall it was narrow, sloppy and unbalanced as we were undone by the home side and didn’t show enough energy or quality before going 3-0 down. 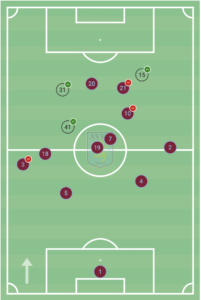 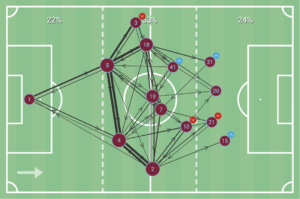 One of the very few positives from the game was Leon Bailey’s influence as a second-half substitute as he offered real flair and direct attacking threat in his first appearance for the club.

There will no doubt be more to come from him as he settles and builds confidence to showcase his class at this level, but he’ll be pleased to have provided an assist on his debut too, despite the disappointing scoreline.

As seen in the image below, the 24-year-old played an excellent ball into the box which found McGinn, who in turn produced a stunning finish to bring us back into the game.

Danny Ings deserves credit too as his movement drags the defender away with him to afford McGinn a bit more space to take on the shot first time, and it subsequently flew into the back of the net. 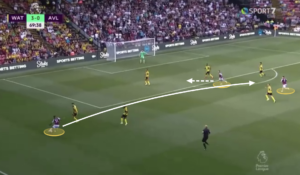 Villa need to shore things up in midfield to make us more difficult to break down as we were for large parts of last season. If we don’t, we could be looking very vulnerable to pace on the counter-attack all year long as Sarr has produced the blueprint on how to hurt us.

That said, we improved after the break and played more to the level expected from Smith and so it’s hoped that lessons were learned in this clash and we make the necessary adjustments and improvements to secure all three points at home to the Magpies next Saturday.