As we look to put an end to our poor form against West Ham on Sunday, Aston Villa boss Dean Smith is edging closer to having a fully-fit squad at his disposal.

Leon Bailey’s return off the bench in the defeat to Arsenal was a significant positive on a desperately disappointing night in north London last week, and it’s hoped that with another week’s worth of training under his belt, he’s now ready to start this weekend.

READ MORE: McGinn primed to step up for Villa and take game to next level

Elsewhere, Morgan Sanson and Bertrand Traore are back in the mix after their recent spells on the sidelines having been named on the bench last time out, as are Carney Chukwuemeka and Keinan Davis who have both recently featured for the U23s.

In turn, that can only be a good thing for Villa as we look to get back on track in the coming weeks and put together a run of form, but there are two players in particular who will arguably be the more important returning individuals.

To an extent, it’s difficult to suggest Sanson will play a major role when back in the side given the injury woes and lack of playing time he has struggled with since joining us in January.

Nevertheless, the French midfielder showed in his all-too brief appearance against Chelsea in the Carabao Cup last month that he can add a vital balance to our midfield along with technical quality to be a key link between the lines and be a composed, controlling figure in the middle of the pitch.

As Smith decides this week whether or not to continue with the 3-5-2 system or switch back to a 4-3-3, it’s clear based on recent form that our best current options in a midfield trio are John McGinn, Douglas Luiz and Jacob Ramsey.

That said, Sanson is now knocking on the door to be involved once again, and ultimately, if one of the three aren’t performing to their best and to the standard required, it’s time for the 27-year-old to step in and step up to warrant his place in the starting XI and to show why Villa signed him in the first place.

As noted above, it’s the tenacity off the ball and the technical skill on it that he brings to the team that could prove to be absolutely crucial, and so it’s hoped that we get to see that sooner rather than later.

As for Bailey, his impact against Watford, Everton and Arsenal has shown just how dangerous a player he is and how influential he could be in this Villa side.

With his direct running, pace, creativity and goal threat, he adds a completely different dynamic to the Villa attack, and with better luck injury wise, we’ll get to see the best of him in the upcoming matches.

Villa face a key period in our season now. Off the back of some disappointing defeats and performances, Smith needs to get his side back to winning ways as soon as possible, and in order to do that, arguably the most sensible strategy would be to go back to what has worked in the past and get the best out of key players in their more natural roles.

The XI below would achieve that, and so it’s hoped that we see something similar against West Ham on Sunday with Sanson and Bailey set to become two pivotal cogs in the Villa side. 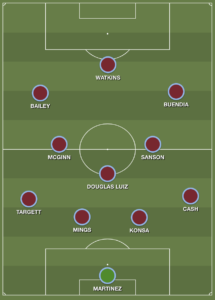