Aston Villa endured an afternoon to forget against Wolves on Saturday, but Emiliano Buendia’s performance was certainly a big positive.

It’s been a stop-start few months for the 24-year-old following his arrival at Villa from Norwich City over the summer, as we haven’t yet managed to see the best of him on a consistent basis.

Having picked up a knock in pre-season coupled with his absence due to international duty last month, he hasn’t been able to reach his peak conditioning and find his top form in Dean Smith’s starting XI.

However, after getting the nod against Wolves, Buendia showed more of why Villa invested heavily in him as the Argentina has the ability to provide much-needed creativity and technical quality in the final third to make the difference.

There are various statistics that can be taken from his performance, but the few listed in the tweet below stand out for a variety of reasons.

Positive performance from Emi Buendia on Saturday, hopefully can build on that now & become an increasingly influential figure for us. Numbers below amongst his highest so far this season in PL.

They show his incisive play on and off the ball from both an attacking and defensive perspective as he is more than capable of playing a pivotal role in both phases of the game.

From his accurate distribution to his ability to win the ball back both in his own half and in the opposition’s half, Buendia does it all when he’s fully fit and it’s hoped that we’re edging closer to seeing him reach his best condition.

Arguably the most encouraging and interesting statistic though is that he received 22 passes in the time he was on the pitch at the weekend, the highest number registered by him so far this season in the Premier League.

It was clear while watching the game that Buendia was making himself available at every opportunity as he was eager to get on the ball and make things happen. That doesn’t just come by luck though, as he was clever in his movement to find pockets of space, both deeper in our own half and in between the lines in Wolves’ half, to then turn and start to probe to find ways through the Wolves defence.

We saw that with two efforts on goal which were unfortunately not on target, while he had one stand-out pass in particular as he played in Danny Ings with a lovely through-ball, but his Villa teammate couldn’t find the finish.

It’s hoped that the more he plays the more decisive he’ll become, as he’ll not only become fitter and sharper himself, but he’s likely to build chemistry and understanding with those around him to grow into a fundamental role in the side.

Buendia certainly impressed on Saturday in what turned out to be a bitterly disappointing game, the hope now is that he can build on that moving forward and consistently become an increasingly influential figure in the Villa XI. 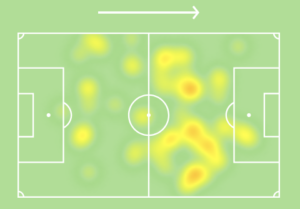