Aston Villa travel to the Emirates to face Arsenal in the Premier League on Friday night, and Dean Smith has a big decision to make on his starting line-up.

Villa currently sit in 13th place in the table with 10 points from our eight games thus far, with our next opponents just a place above us in the standings and a point better off.

READ MORE: McGinn primed to step up for Villa and take game to next level

In turn, both sides will be desperate to secure all three points to move up the table ahead of the remaining fixtures this weekend, and after our league double over the Gunners last season, it’s hoped that we can continue our good form against them.

For Smith though, the big decisions start before the game, as while he noted that Matty Cash, Leon Bailey and Bertrand Traore are all available after shaking off their respective injury concerns, as per the club’s official site, time will tell if he sticks with the same system or decides to tweak it instead.

Hause in for Tuanzebe in only change, Bailey on bench

With Bailey and Traore likely only to be fit enough for the bench given their respective lengthy spells on the sidelines, Villa are arguably more likely to stick with the 3-5-2 system against Arsenal to start the game.

That formation should give us more solidity at the back and a better chance of being organised and giving ourselves a foundation on which we can go out and win the game, while bringing on the likes of Bailey and Traore if required can ultimately change the encounter in no time.

In turn, the expectation is that Villa will field an almost identical XI to that which faced Wolves, albeit with one change at the back as Kortney Hause could come in for Axel Tuanzebe.

Hause was unfortunate to be dropped against his former side last weekend given his impressive performances prior to that, and so it would seem a sensible switch to make with Tuanzebe perhaps brought in due to the expectation of needing his physicality against Raul Jimenez, who started on the bench.

That aside, we’ll perhaps go with the same XI as John McGinn looks to continue his fine form in midfield, while Emiliano Buendia will hope to build on his improved performance last time out as his influence on the Villa XI increases.

That will also see the Ollie Watkins and Danny Ings partnership continue, and it’s hoped that we see improvement in their combination play to add to the goals they’ve scored, having bagged one apiece in the last two outings, as it hasn’t quite clicked for the pair as of yet. 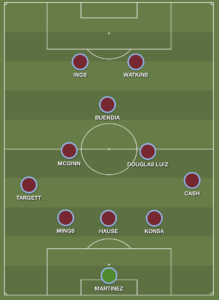