Aston Villa travel to Brentford on Sunday for our first game of 2022, with Steven Gerrard hoping to be back on the touchline after missing the encounter against Chelsea last weekend.

The Villa boss was absent for the encounter with the Blues last time out after testing positive for COVID, and so having followed the required protocols, he is expected to receive clearance to return to the sideline this weekend in what will be a boost for his players.

Following that defeat to Chelsea, we’ve dropped back down into the bottom half of the Premier League table, but Gerrard will be hopeful that his side can put a good run of results together in January to start moving us back up in the right direction and that starts with a tricky trip to Brentford.

The Bees currently sit in 14th place in the standings, just two points adrift of us in 12th, and while they’ve won two, lost two and drawn one in their five outings, it just shows that they will be a threat on their day and especially so with their home crowd backing them.

After picking up his fifth yellow card of the season against Chelsea, Villa captain Tyrone Mings is suspended and will not feature against Thomas Frank’s side.

That in turn should hand Kortney Hause an opportunity to take his place in the starting XI, and although it’s a blow losing our influential defensive talisman, Hause has already shown this year that he’s capable of stepping in and doing a job for the side, while Axel Tuanzebe is another option in reserve.

The Man Utd loanee has had more playing time under Gerrard than Hause, but as a natural left-sided defender and with arguably the more suitable characteristics to try and nullify Ivan Toney’s physical and aerial threat, it should be the latter who gets the nod.

It’s unlikely much else will change in terms of the line-up, but there is one more switch that Gerrard will be expected to make and that’s the return of John McGinn to the side after his absence last time out.

Given how impressive Douglas Luiz, Jacob Ramsey and Morgan Sanson were last Sunday, it would be disappointing to see any of that trio drop out, and so given his struggle to get going in that game, Danny Ings could be the one to miss out with Ramsey shifted further up the field on the left side to accommodate McGinn in midfield.

Further, that will hopefully also see Ollie Watkins return to being the lone striker to lead the line, a role in which he has been much more effective, with Emiliano Buendia offering support on the opposite flank as he goes in search of his best form still as he struggles to be a consistently decisive figure for us in the final third.

The 25-year-old has just one goal and two assists to his name in 16 league appearances so far this season, and given his transfer fee and the expectation on his shoulders given his quality, the Villa faithful will undoubtedly be hoping for more from him in the second half of the campaign.

Villa were boosted by the return of Bertrand Traore off the bench against Chelsea and so he’ll be an important option for Gerrard given his qualities in attack, while the likes of Anwar El Ghazi and Carney Chukwuemeka are also on hand to come in and change the game if required.

While Villa have been competitive against the top sides in recent weeks, we’ve ultimately fallen short and suffered defeats to Man City, Liverpool and Chelsea.

In contrast, Gerrard has overseen wins against Brighton, Crystal Palace, Leicester City and Norwich City since arriving, and while Brentford certainly possess a lot of quality and will be a difficult test, it’s a game that we will hope to be more aggressive and ambitious in to try and get all three points.

Villa have become harder to beat under our new boss, and we’ll need to be switched on throughout in this one as a clean sheet will give us the foundation to go on and win the game. However, it’s hoped that we don’t sit back too much, as with the class in the side, these are the encounters where we need to be more positive and put the pressure on the opposition.

The reverse fixture ended in a 1-1 draw at Villa Park in the early stages of the campaign, and while Buendia was on the scoresheet that day with a superb goal, it’s hoped Gerrard will analyse and assess that performance, identify where we can hurt Brentford consistently in this particular encounter and try as best we can to keep their attacking talent quiet to return home with an important win to start 2022. 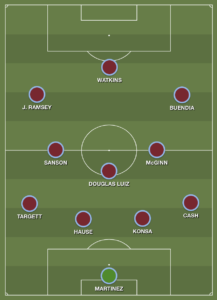