It was a disappointing start to the campaign for Dean Smith and his squad as we suffered a 3-2 defeat away at Watford. However, the response has been positive as we’ve picked up wins against Newcastle Utd and Barrow in the league and Carabao Cup respectively, and that has given us something to build on.

The players will no doubt be desperate to end on a high before heading into the break, and with Brentford impressing in their start to the campaign, Villa will have to be at their best to ensure we secure three more points.

As per Smith in his press conference on Friday, he confirmed that Ollie Watkins would be a late call depending on how he goes in training, while Leon Bailey, Bertrand Traore, Morgan Sanson and Keinan Davis all miss out.

In turn, it seems likely that we’ll go with a similar XI that faced Newcastle, and given it resulted in a win, it surely would be a smart move to stick with a winning XI.

That would see Emiliano Martinez continue between the posts, while Matty Cash, Ezri Konsa, Tyrone Mings and Ashley Young will make up the back four in front of him.

Matt Targett enjoyed a productive run out in midweek which would have helped with his fitness, but Young ultimately offers a safer option at this moment in time.

In midfield, Douglas Luiz was key on his return and so the Brazilian international will be expected to partner John McGinn in the middle again, while Jacob Ramsey has made a really positive impression since coming on at Watford and after playing an influential role against Newcastle, he should be named in a midfield three.

Emiliano Buendia and Anwar El Ghazi will provide width in the front three, and while Watkins may only be fit enough for the bench given his time on the sidelines, that should see Danny Ings lead the line once again fresh from his stunning goal last time out at Villa Park.

Time will tell if Smith has any surprises lined up for us, but this is widely expected to be the team that starts against Brentford. 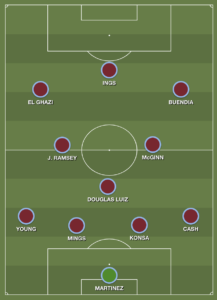