Aston Villa host Brighton on Saturday as Steven Gerrard will hope to enjoy a winning start to life as our Head Coach.

This will be the first outing for Villa since Dean Smith’s departure and Gerrard’s subsequent arrival to replace him, and so all eyes will be on what changes he has been able to implement in a short space of time.

In the midst of a five-game losing streak, Villa have dropped to 16th in the Premier League table after 11 games, and so Gerrard will no doubt be eager to get points on the board as soon as possible and to improve the level of performance from his players.

While Douglas Luiz has dropped hints this week that he is working hard to return after missing our last two games due to injury, it remains to be seen whether or not he’s passed fit to feature.

Additionally, Morgan Sanson posted on social media suggesting that he was in France last week, and so it’s unclear whether or not he’ll be at Gerrard’s disposal for this one either.

In turn, Jacob Ramsey, fresh from impressing on international duty for the England U21s, will hope to get a chance to impress the new Villa boss immediately, and he could be joined by John McGinn and Marvelous Nakamba in a midfield three.

It’s likely to be a familiar back four as Gerrard assesses and analyses those available to him, with Emiliano Martinez seeing Matty Cash, Ezri Konsa, Tyrone Mings and Matt Targett in front of him. Konsa should return after serving his suspension.

Time will tell what combination Gerrard goes with in attack though, as with Danny Ings possibly back in contention after his absence prior to the international, he joins Ollie Watkins, Emiliano Buendia and Leon Bailey in vying for a starting berth.

Bailey registered back-to-back games in which he played over 80 minutes for Jamaica, and so that would undoubtedly have done wonders for his fitness and confidence. That said, Gerrard will have fresh ideas on how he wants his Villa side to play, both on and off the ball, and so it will certainly be interesting to see who he favours in his debut game in charge. 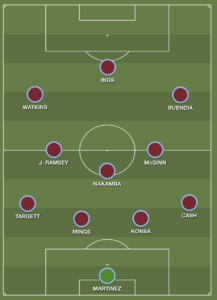