Aston Villa host Burnley on Saturday afternoon as Steven Gerrard will hope to see his side extend their impressive form since his arrival.

Villa have picked up four wins from six since the 41-year-old took charge, with the other two ending in competitive losses to Man City and Liverpool.

In turn, having picked up 12 points from a possible 18 and conceded just six goals in those outings after shipping 13 in our previous five-game losing streak, things are certainly moving in the right direction, albeit still with plenty of room for improvement.

Burnley will arrive at Villa Park desperate for points as they currently sit in 18th place in the Premier League table, two points adrift of safety, having won just once so far this season.

Villa must put that aside though and focus on getting three important points as we look to continue to build momentum and keep our good form going as we hope to continue to climb the standings in the coming weeks.

As noted above, Villa have become hard to beat again in recent games and have rediscovered the strong core to the side that makes it difficult for the opposition to find a way through us.

With that in mind, it’s highly unlikely that Gerrard will choose to change anything at the back, with Emiliano Martinez having a settled back-four of Matt Targett, Tyrone Mings, Ezri Konsa and Matty Cash in front of him.

It’s a similar scenario in midfield with absentees also making it a simple choice for the Villa boss, as Marvelous Nakamba remains sidelined through injury while it remains to be seen if Morgan Sanson is in contention for this one.

Given the success that they enjoyed in midweek though, Jacob Ramsey, Douglas Luiz and John McGinn will hope to build on that and drive us forward in another win, while Ollie Watkins has bagged three goals in his last six Premier League outings and so that form should see him remain the focal point of our attack to lead the line.

We saw more positive signs from Emiliano Buendia in the win over Norwich City on Tuesday, and the Argentine will hope to provide us with a spark in this one provided he has recovered from the knock he sustained at Carrow Road prior to coming off, and so ultimately, most of the XI is expected to be unchanged.

The only big decision that Gerrard arguably has with regards to his Villa XI is who starts on the left flank with Carney Chukwuekema possibly putting pressure on Ashley Young for that starting berth.

The youngster came off the bench and impressed in midweek as he grabbed an assist for our second and earned praise from Gerrard for his defensive work on Billy Gilmour too.

In turn, he’ll hope to be rewarded for that with a start, and given we will look to be more aggressive and in control against Burnley at home, it could be a positive switch from the Villa boss to give us more quality and threat in the final third. 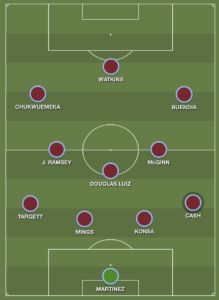