Aston Villa face Chelsea at Stamford Bridge in the third round of the Carabao Cup on Wednesday, and Dean Smith is expected to make changes to his side.

Villa will be buoyed after our win over Everton at the weekend, and it’s hoped that we can take that into this encounter to keep our cup run going this year.

Naturally, it will be difficult given the quality that Thomas Tuchel has at his disposal at Chelsea, even if he opts to make changes to his starting line-up, but Villa can boast strength in depth of our own this season and Smith will no doubt put out a side that can compete.

McGinn, Bailey likely to miss out

With John McGinn going off in the first half against Everton with suspected concussion, coupled with Leon Bailey suffering a quad injury after scoring, it’s expected that the pair won’t be risked for this one.

That in turn opens up opportunities for others, and so it will be interesting to see what Smith goes with and whether or not that changes the system having gone with a 3-5-2 in the last two games, which worked particularly well against Chelsea in the Premier League just over a week ago.

Sanson, Buendia starts would be ideal

His absence on the bench at the weekend was a concern, but there has been no comment on Morgan Sanson who has yet to feature this season as he worked his way back from a knee injury sustained in the last campaign.

It’s hoped that decision was taken with the idea of him starting against Chelsea on Wednesday, as it would be a real boost to see him get minutes and edge closer to being available to Smith more regularly.

Further, having been away on international duty and subsequently away from the Villa squad for around three weeks due to Covid regulations, Emiliano Buendia is another who is in need of playing time.

Having shown us his class against Brentford, the Argentine forward will want to get back on the pitch and fight for his place in the side and so this could be an ideal opportunity for it.

Given our disrupted pre-season schedule coupled with the injuries and fitness issues we’ve been dealing with through the start of the Premier League campaign, there are a few players still short of full match fitness.

Ollie Watkins is still looking to get off the mark this season and so he should be given a start in this game, while Bertrand Traore is working his way back from injury and needs to get playing time to rediscover his best form.

This will also be an opportunity for the likes of Kortney Hause, Marvelous Nakamba and Anwar El Ghazi to make a case for a more prominent role, and so we can expect a very different Villa line-up this week. 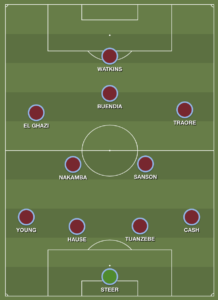