VIlla’s encounter with Burnley last weekend was called off late due to the number of absentees through COVID, and so it remains to be seen if those individuals affected are able to recover and be eligible to feature this time round.

Further, it was confirmed by the club on Christmas Day that Steven Gerrard himself had contracted the virus, and so he will now be forced to miss out on being on the touchline for both the Chelsea and Leeds Utd games.

Given the confidentiality around the identity of the players who have been impacted by COVID, it’s difficult to put forward a possible starting XI with any real conviction, but what we do know is that Jed Steer, Keinan Davis, Morgan Sanson and Anwar El Ghazi all missed our win over Norwich on December 14, and so it remains to be seen if they’re back in contention.

In addition though, time will also tell if there are any fresh COVID positive cases, which in turn will mean that there will be further absences for the next two games.

Gerrard, or his staff for that matter, will perhaps have little hesitation in bringing in some of the club’s promising youngsters, with a string of them training with the first-team over the past week or so, but it remains to be seen if they are needed, particularly in the XI.

No Nakamba, Douglas Luiz to shift into deeper midfield role

One absence we do know of for certain at this stage is Marvelous Nakamba, after the Villa midfielder underwent surgery on his knee and is expected to be ruled out for around three to four months. Given his form since Gerrard arrived, that’s a blow for Villa, especially in a game like this where we’ll need some protection in front of the backline and Nakamba certainly does an excellent job of sweeping up danger in that area.

That in turn is likely to see Douglas Luiz drop into the deeper midfield role in front of the defence to give us a bit more technical quality too, with John McGinn and Jacob Ramsey forming the three-man midfield that worked so well against Norwich as they can offer something in both phases of the game with their defensive tenacity and attacking quality.

As with every suggestion with regards to the line up this weekend, it’s hoped that Emi Martinez, Matty Cash, Ezri Konsa, Tyrone Mings and Matt Targett are all available for this game as we’ve rediscovered our solidity at the back under Gerrard and once again look like a difficult side to break through.

Emi Buendia and Ashley Young may have had enough time to shake off knocks that they picked up against Norwich to start in this one, while Ollie Watkins is in such fine form that he will be expected to lead the line again, provided that he’s healthy and has the green light to play along with those mentioned above.

There’s a good balance to this Villa side now that key individuals are fit, and Gerrard will be hoping to have as consistent a starting XI as possible in order to establish stability and familiarity within the ranks to now kick on after making a solid start under his management.

Danny Ings, Carney Chukwuemeka and some of our young talent could all be in contention off the bench too, and so there is hopefully enough in the squad to tweak things if the encounter isn’t going in our favour, with a strong start needed from Villa in order to set the tempo and take the game to our opponents as much as possible.

This is going to be a hugely difficult challenge for Villa such is the quality of the Chelsea squad as they continue to target Premier League success this season, and it could be made even more tricky by absentees on our side. Nevertheless, we still have quality of our own, and with a home crowd behind the players in an appetising Boxing Day showdown, it’s hoped that we can keep our positive run of form going even without Gerrard’s presence. 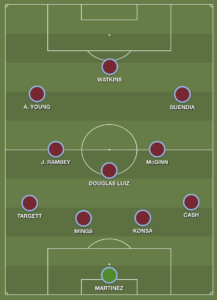