Gerrard has enjoyed a strong start to life in charge, picking up wins over Brighton and Crystal Palace to not only push us up the table, but also boost confidence and belief within the group again after a disappointing five-game losing streak prior to that.

The hope now is that he’s building foundations and an identity that will lead to a long-term improvement and not just a short-term lift that usually comes with a managerial change, but it will be difficult to extend that positive run of form with Pep Guardiola’s side heading to Villa Park.

Given our performances and results in the last two outings, it’s likely that Gerrard will want to stick with a settled Villa XI to build some consistency and familiarity in the side, but there could be one key change to his line-up in midweek.

Buendia in for Bailey, no Ings on bench for Villa

As confirmed by Gerrard in his press conference on Tuesday, Danny Ings has been ruled out of this encounter due to injury, and so that means Ollie Watkins will continue to lead the line up top in a likely 4-3-3 system.

With so many strong performances against Palace, the rest of the side also largely picks itself, with Matty Cash, Ezri Konsa, Tyrone Mings and Matt Targett looking to continue their impressive form at the back having helped Emiliano Martinez to keep things tight with one goal conceded in our last two games.

The midfield is also expected to stay the same with Marvelous Nakamba earning the club’s Man of the Match award last time out, while both Jacob Ramsey and John McGinn have been excellent too.

Ashley Young certainly impressed the Villa boss at the weekend and as per the report above, Gerrard singled the stalwart out for individual praise ahead of the game given his influence and experience on the pitch, and so that would suggest that he’ll keep his place in the XI for this one.

The only change that Villa are arguably possibly set to make is on the right wing then, with Emiliano Buendia pushing Leon Bailey for a starting berth.

Bailey had his moments at Palace and he’s starting to look sharper with every run out he gets, but given the opposition and the level of defensive work that we’ll need from the entire line-up, Buendia’s work ethic and defensive qualities could swing it in his favour to get the nod.

Villa need more attacking class from the Argentine moving forward, but his efforts off the ball are also crucial and so that’s why he could start on Wednesday night. Anwar El Ghazi is another pushing for a start after impressing off the bench in the last two games, but he could be crowded out and pushed down the pecking order. 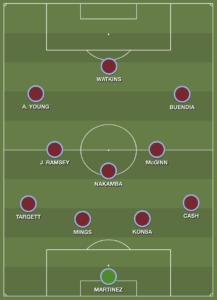