Aston Villa face Newcastle Utd on Sunday and Steven Gerrard is expected to make changes to the side that drew with Leeds Utd in midweek.

Villa picked up a point in a thrilling encounter with Leeds on Wednesday night, but there were issues that Gerrard will want to address, namely in the defensive phase of the game.

Our opponents will no doubt be buoyed by their win last time out as they try to escape the relegation battle at the bottom of the Premier League table, and with the quality that they have in their side, it promises to be a difficult trip to St James’ Park, where Villa have struggled historically.

Gerrard will be forced into one change, but it remains to be seen how the rest of the XI shapes up.

Following his red card against Leeds, Ezri Konsa will be suspended for this encounter and so Gerrard will be forced into at least one change at the back.

Calum Chambers is expected to come in and be a ‘like-for-like’ replacement, as although Kortney Hause is of course a strong contender to step in as well, Villa will surely prefer a balance in the centre-half pairing in terms of a left-footer in Tyrone Mings and a right-footer in Chambers alongside him.

Emiliano Martinez will take his place between the posts, while Lucas Digne and Matty Cash will no doubt continue in the full-back positions.

As noted by Gerrard in his press conference on Friday, Emiliano Buendia is a ‘serious doubt’ after sustaining a heavy blow to his hip last time out, and so it remains to be seen whether or not he will be able to recover in time to take his place in the starting XI.

Given how influential he has been for us in recent weeks, it would be a real blow if he’s sidelined, but ultimately Villa do have strength in depth now and so replacements are available to Gerrard.

Perhaps one of the more likely solutions will be to bring in Morgan Sanson in midfield and push Jacob Ramsey into a more advanced role in the final third, giving him a chance to add to his goals and assists tallies as he has continued to grow in influence with his decisive contributions this season.

Further, with Villa struggling defensively against Leeds, particularly in transition where our midfield didn’t provide enough protection for the backline, Sanson’s physical presence and intensity will hopefully add an important dynamic in that area of the pitch to ensure we’re more difficult to break down.

Philippe Coutinho will certainly be in line to start after his impressive outing on Wednesday night, while there is a decision for Gerrard up front with Ollie Watkins struggling for form and Danny Ings knocking on the door to replace him.

Given we’re on the road though and in need of our defensive strategy and shape to start from the front, Watkins’ work ethic and ability to press higher up the pitch could be pivotal, and so it’s hoped that he gets another chance to impress in this one.

Villa can undoubtedly expect a tough challenge on Sunday, but if we can tighten things up at the back and give our attacking players the foundation to go out and win the game, it’s hoped we’ll have enough to return home with all three points. 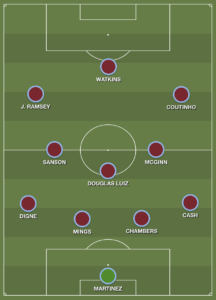