Aston Villa boss Dean Smith could be tempted to make two crucial changes to his side as we prepare to face Newcastle Utd this weekend.

Villa must produce a positive response after our defeat to Watford last time out, with Smith far from pleased with his side’s performance at Vicarage Road, particularly in the first half, as we fell 3-0 behind after a slow, lethargic start.

With a sold-out Villa Park backing us, we’ll hope to see a more intense and urgent display from the entire XI as we look to put our first points on the board and kick-start our Premier League campaign.

As per Smith in his press conference on Friday though, Ollie Watkins misses out again due to his knee injury, while Bertrand Traore has been sidelined by a hamstring issue which will keep him out of contention until after the international break.

In turn, Danny Ings will be expected to lead the line again, while there could be a key decision to be made on whether or not Leon Bailey is ready to start.

The 24-year-old provided the assist for John McGinn’s goal shortly after coming on at Watford, and so with another week’s worth of training and building understanding with his teammates, it’s hoped that he is ready to be named in the XI. That in turn could see either Ashley Young or Anwar El Ghazi dropping out, with Emiliano Buendia keeping his place.

Douglas Luiz returned to Bodymoor Heath this week after his hectic summer with Brazil, but it’s unlikely that he has had enough time training to be immediately named in the starting XI, while Matt Targett will hopefully be given an immediate chance to bounce back from his difficult afternoon up against Ismaila Sarr.

The defence will likely remain the same with Emiliano Martinez between the posts and Matty Cash, Ezri Konsa, Tyrone Mings and Targett in front of him.

With that in mind, the Villa XI to face Newcastle arguably won’t be too different to the one that started at Watford, but for the possible integration of Bailey which will be an exciting move in itself, while it remains to be seen if Luiz can make a late push to convince Smith to give him the nod too.

That said, Jacob Ramsey made a positive impact off the bench last time out, and so he could be knocking on the door as well which might call for a sensible tweak to the system, given the way in which our midfield was overrun last Saturday.

Villa must learn from last weekend in terms of how easy it was for Watford to bypass our midfield which in turn set up dangerous counter-attacks up against a high line that Smith adopted, and with the likes of Callum Wilson, Allan Saint-Maximin and Miguel Almiron capable of hurting us in similar fashion, we can’t make the same mistakes.

Having Ramsey in there in a three-man midfield could provide us with more numbers in the middle to keep possession better and put pressure on Newcastle as we press higher up the pitch.

Time will tell which way Smith goes, but this is just one of the options available to him… 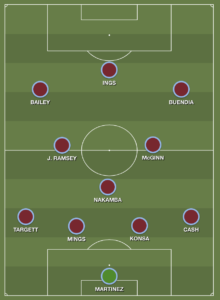