Aston Villa travel to face Norwich City at Carrow Road on Tuesday night, and Morgan Sanson could be in line to start.

Villa were dealt a blow this week after Steven Gerrard confirmed in his press conference on Monday that midfielder Marvelous Nakamba will face a couple of weeks on the sidelines due to a knee injury.

While it remains to be seen just how serious the issue is, it opens the door for at least one change to the side that lost at Liverpool this past weekend, and it’s hoped that it proves to be an important switch which helps us on our way to collecting all three points.

Sanson to start, Buendia to return to Villa XI

As noted above, Nakamba will be forced to sit this game out after suffering a knee injury which requires an MRI scan on Tuesday to understand the full extent of the issue.

Having been a key figure in Gerrard’s line-up since his arrival, that is certainly a blow for the Villa boss, but fortunately we’re now in a position that we have a strong squad and top options available to come in and fill the void.

It’s expected that Sanson will be called into action for this encounter, with the Frenchman performing well off the bench in recent weeks and Gerrard has made no secret of the fact that he believes the former Marseille man will be a important player for us moving forward.

This will hopefully be his chance to prove that, and given we’ll want to be more aggressive and ambitious in this game, he could suit that style perfectly.

Elsewhere, it’s unlikely that Gerrard will make many more changes with the back four in front of Emiliano Martinez expected to stay the same, while Douglas Luiz could shift into a more defensive role in midfield alongside Sanson and John McGinn.

Ollie Watkins should be given the chance to continue to lead the line given his good form recently, while Jacob Ramsey will likely provide him with support in the final third. The only other change we’ll see Villa make is Emiliano Buendia coming back into the XI to start against his old club, with Gerrard confirming that decision in his press conference.

Ultimately, it has been a slow start for the Argentine since his summer switch. However, we’ve certainly seen more positive things from him in the last handful of games, and he’ll be hoping to now build on that, showcase his quality consistently and grow into a leading figure for Villa moving forward. 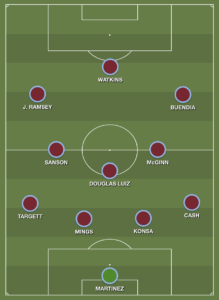