Aston Villa face a crunch clash at Southampton on Friday night, with Dean Smith needing a win to alleviate some of the pressure building.

Villa have suffered four consecutive defeats in the Premier League, and so ahead of the international break, it’s vital that we sign off with a morale and confidence-boosting win to end that poor run of form.

It won’t be easy against a Southampton side that has collected seven points from their last three outings, but to arrest our slide and get back on track, it’s a game that we have to be competitive in at the very least and three points would be a huge boost for all concerned.

Smith will be forced to shuffle his pack at St. Mary’s, with Ezri Konsa suspended after his red card against West Ham, while Jacob Ramsey was forced off early on with a nasty looking ankle injury.

In turn, Axel Tuanzebe could come in at the back, while it remains to be seen if Smith recalls captain Tyrone Mings after he sat out at the weekend, as he also arguably faces a decision on Matt Targett after another poor performance last time out.

Villa have conceded 12 goals in our last four games, and so it’s imperative that whichever combinations and back four are selected, they provide a solid foundation on which we can get a clean sheet and go out and win the game.

In midfield, it remains to be seen if Douglas Luiz recovers in time to feature after sitting out against the Hammers, and so at this stage, it looks possible that Marvelous Nakamba and John McGinn will keep their respective places in the starting XI.

Morgan Sanson missed out due to illness on Sunday, and so it’s hoped that he can recover to get a rare start, as his technical quality and tenacity in midfield could be exactly what we need and what’s been missing in recent games.

Similarly to Luiz, it’s unclear right now as to whether Danny Ings will be available for selection, and so with that in mind, it would come as no surprise if Smith stuck with the same front three of Leon Bailey, Emiliano Buendia and Ollie Watkins to lead our charge to try and get the goals to pick up all three points.

Buendia grabbed an assist for Watkins’ goal at the weekend, and so allowing the pair the chance to build on that understanding and chemistry could potentially be decisive, as we also saw how well they can link up in pre-season.

It’s important that Smith gets the big decisions right for this one, and it’s equally as imperative that the players respond and produce a performance for our manager who is under pressure this week. A positive display and a win would certainly lift the mood amongst the Villa faithful after what have been a difficult few weeks. 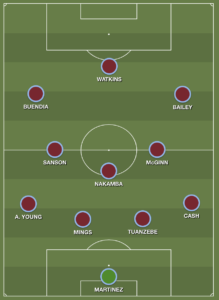