After a disrupted pre-season schedule with game cancellations and injury concerns, it hasn’t been an entirely ideal preparation for the upcoming campaign.

Nevertheless, Smith will be pleased with the new additions made despite Jack Grealish’s exit, while he delivered positive updates on the team news front in his press conference on Friday, as per the link above, as he revealed both Emiliano Buendia and Leon Bailey will be involved this weekend.

There is still a doubt over Ollie Watkins though after he suffered bone bruising around his knee in the friendly against Salernitana last weekend, and given it appeared as though he was absent from training on Friday, he might be missing for the trip to Watford.

The boost that our recruitment drive this summer has given us though is depth and options for Smith, and so if Watkins is ruled out while Bailey isn’t likely to start given his lack of training with the rest of the group, there are still plenty of attacking options at Smith’s disposal.

The back five picks itself with Emiliano Martinez, Matty Cash, Ezri Konsa, Tyrone Mings and Matt Targett all fit and ready to continue to build on the solid foundation they formed last season, while John McGinn and Marvelous Nakamba featured heavily throughout pre-season and so can be expected to form the two-man deeper midfield partnership.

Should Buendia get the nod as expected if he has indeed been able to train all week, he could be deployed through the middle, with Smith perhaps opting to go with Ashley Young and Jaden Philogene-Bidace on the wings given their fitness is probably near their respective peaks given how many minutes they’ve logged in pre-season.

That would leave Danny Ings to lead our line after scoring in his first appearance for the club last time out, and so it’s hoped that there is enough quality and fitness in that starting XI to put us in a strong position to secure all three points.

Smith could have the likes of Watkins, Bailey, Bertrand Traore, Anwar El Ghazi and Conor Hourihane available off the bench, and so there will be options to change it up if required. In turn, Villa will hope there’s enough there to get the job done against a side who will no doubt be up for the game on their return to the top flight. 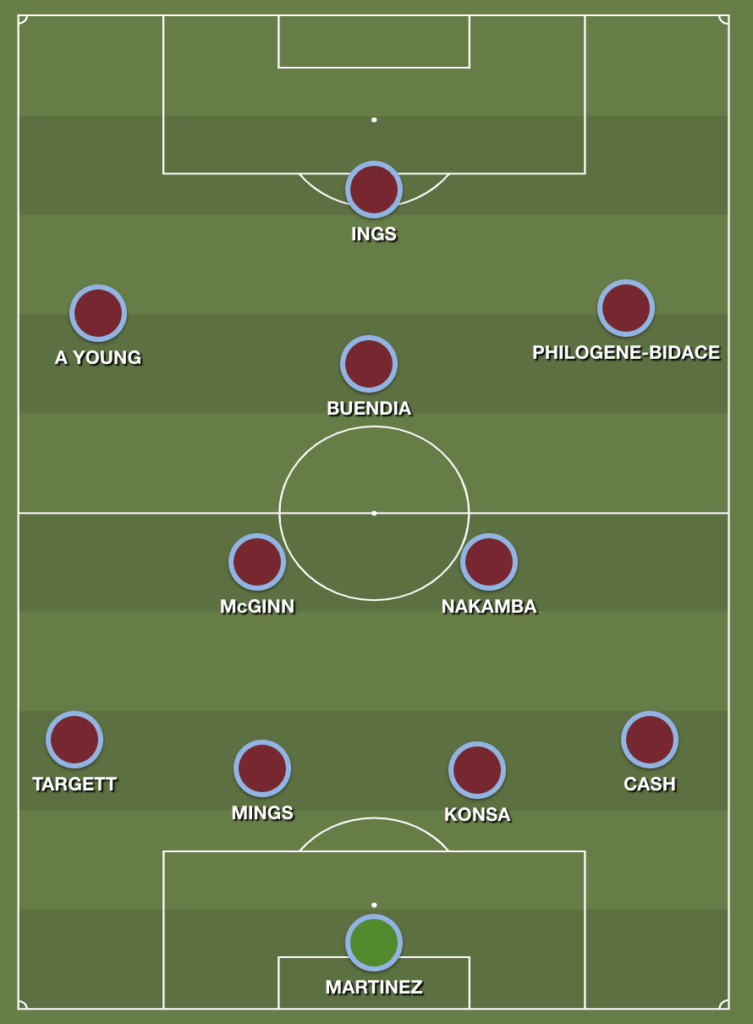