Aston Villa will look to end a three-game losing streak on Sunday as we host a dangerous and in-form West Ham Utd side.

Defeats to Tottenham, Wolves and Arsenal have soured what had been a relatively decent start to the Premier League campaign, and so Dean Smith and his players will now be desperate to end that poor form and get back to winning ways.

It won’t be easy against the Hammers, with David Moyes continuing his fine work from last season as they are also now showing an ability to compete on multiple fronts.

Nevertheless, Villa have the quality in the side to take on the best and win on their day, but it’s important that we now show that on the pitch and back up all the talk about the class of the players available to Smith.

While it produced positive results at first and seemed to get the best out of the squad and players available, the 3-5-2 hasn’t yielded the same returns in recent weeks.

Particularly against Wolves in the last 10 minutes and in the first half at Arsenal, the weaknesses and vulnerabilities of that system were exposed, and despite trying to keep things tight at the back to build a foundation on to go out and win games, we’ve now conceded eight goals in our last three outings.

Despite that though, Smith was asked about the system during his press conference on Friday, and the Villa boss appeared to double down on comments he made after the Arsenal defeat and seemed to point the finger of blame for that result more so at the poor displays from players in the opening 45 minutes and the penalty decision.

Further, he went on to suggest that Ollie Watkins can drift in from the left side effectively and pose a goal threat, and so despite insisting prior to the campaign that our top goalscorer from last season wouldn’t be shifted across out wide after the arrival of Danny Ings, it appears as though his role will continue to differ this year.

Much hinges on Bailey’s availability, as per the report above Smith said a late decision will be made on whether or not the 24-year-old is fit enough to start, and so if he is, that will surely force a change in system to a 4-3-3 to accommodate him on the right wing.

That’s assuming Emiliano Buendia doesn’t also keep his place, but that would then require one of Watkins or Ings to drop out.

These are the decisions that Smith has to get right this weekend, as if we encounter the same problems again and struggle, it will undoubtedly frustrate large sections of the Villa faithful as we’ve evidently had trouble with the 3-5-2 and we’re not getting the best out of certain key individuals.

Time will tell what Smith goes with, but given his comments on Friday, it doesn’t sound as though there will be many changes and perhaps no risks taken with Bailey just yet, which in turn could lead to an almost unchanged side with Kortney Hause potentially coming in for Axel Tuanzebe, after the former was rather harshly dropped earlier this month. 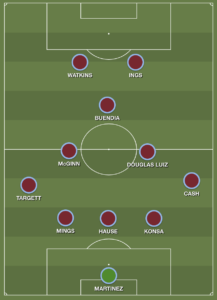