Aston Villa face Wolves on Saturday and Dean Smith has decisions to make regarding his starting XI and whether or not he sticks with a 3-5-2 system.

Villa suffered defeat to Tottenham prior to the international break, but the switch to the 3-5-2 formation brought positive results prior to that against Man Utd, Chelsea and Everton.

Given this next encounter is at home against a side arguably looking to set up relatively defensively to give themselves a foothold in the game, it will be crucial that Smith gets his tactical set up and personnel right for the opposition and situation.

In turn, time will tell if he sticks with the 3-5-2, albeit it could be the way to go initially as we have options off the bench who can come on and change the game as well as giving us flexibility to change system if necessary.

With Douglas Luiz being called up by Brazil over the break and with their last outing coming in the early hours of Friday morning, it’s difficult to see the midfielder being ready at 3pm on Saturday such is the short turnaround.

That could push him to the bench to start the game, and while Emiliano Martinez is facing the same concern while with Argentina, given the demands of his position aren’t quite as taxing, the Villa goalkeeper could receive the green light to start if the Villa medical staff are happy with his condition.

Elsewhere, Leon Bailey has been absent since scoring in our 3-0 win over Everton on September 18, with Smith noting prior to the Spurs game that the Jamaican international is expected to resume training over the break.

While Morgan Sanson shared a post on social media showing his return to Bodymoor Heath this week, Bailey hasn’t followed suit as of yet, and so it raises question marks over his status heading into the Wolves showdown.

Given his lack of playing time and apparent training with the group in recent weeks, it’s difficult seeing him starting on Saturday, and so he will hopefully be available as a spark off the bench, which is a role he’s done superbly in thus far.

Bertrand Traore picked up a knock while on international duty and so he’s likely to miss out, joining Carney Chukwuemeka, Trezeguet and Keinan Davis on the sidelines.

With those issues in mind, it could be that Smith sticks with a 3-5-2 formation, with Marvelous Nakamba coming in for Luiz to shore things up in midfield, while Emiliano Buendia could get a start too in place of Jacob Ramsey.

Villa need to get the Argentine firing and displaying his best form as the creativity and goal threat that he brings will be vitally important as the season progresses. Nakamba’s presence should give him and John McGinn the freedom to get forward and cause Wolves problems, and so there looks to be a good balance in the side with that midfield.

Time will tell what Smith goes with, but it certainly looks as though we’ve got a strong squad now to deal with absentees and still put out an XI more than capable of securing all three points. 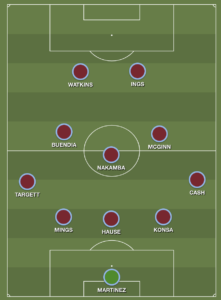