Villa got back to winning ways last weekend and secured three important points at Brighton to put an end to a dismal run of form, which had raised the level of pressure and concern around Gerrard as he looks to oversee a strong finish to the season.

Goals from Matty Cash and Ollie Watkins ensured we returned from the Amex Stadium in better spirits, and it’s important now that we build on that result and follow it up with another victory against an in-form Saints side who are above us in the standings and have certainly shown in recent months that they’re no easy task.

Time will tell if Gerrard simply opts to make no changes to the side that won at Brighton, but ultimately there is an argument to suggest that he should adapt and adjust to the opposition, particularly given we’re at home for this one, and so there could be a couple of key tweaks that need to be made.

Buendia and Sanson to get Villa starting berths

With Villa back at home and needing more creativity to break down a Southampton side which will prioritise setting a strong defensive shape and be disciplined on the road, Emiliano Buendia should be brought back into the starting XI.

While both Ollie Watkins and Danny Ings worked tirelessly off the ball at Brighton, as an attacking partnership, there was little sign of any real improvement in our build-up play with them together, and Ings in particular was anonymous for large periods of the game.

It was a big moment to see Watkins back on the scoresheet after his recent drought, and so it’s hoped that he gets the nod to start up front on his own to lead the line, with Buendia and Philippe Coutinho playing behind him to try and prise Southampton open.

There is little to change in the backline following a clean sheet and no fresh injury concerns, and so Emiliano Martinez, Lucas Digne, Tyrone Mings, Ezri Konsa and Matty Cash will get the nod, while both John McGinn and Jacob Ramsey will likely continue given their importance to this Villa side in both phases of the game.

The only other change to the XI should come in the defensive midfield role, with Morgan Sanson perhaps coming in to replace Douglas Luiz.

Luiz showed once again at Brighton that he struggles in the No.6 role, as he gifted possession to the opposition on two occasions with poor passes that sparked dangerous counter attacks. Coupled with his lack of awareness and positioning from a defensive perspective in that role, Villa need to change it to become harder to break down.

Sanson isn’t a natural No.6 either, but with his attributes and characteristics, he arguably has a better chance of adapting successfully to that position. Tim Iroegbunam also came on late last weekend and looked tidy in possession, but it seems unlikely that Gerrard will throw him in as a starter so soon without firstly gradually increasing his workload and allowing him to adapt and gain experience at this level under less pressure. 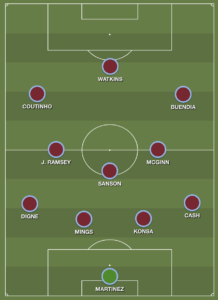