Aston Villa host Watford on Saturday afternoon in what is now a crucial game for Steven Gerrard and his players.

After the abject performance and bitterly disappointing defeat to Newcastle Utd last time out, a positive reaction is certainly needed this weekend to get ourselves back on track.

Our current run of fixtures was seen as a big opportunity for us to start moving up the Premier League table and finish strong, but after a stuttering start in the last two games, it remains to be seen if we can come out of the next few outings with a positive feeling moving forward.

Following that defeat on Tyneside, Gerrard suggested that he will make changes to his starting line-up, but after a week of training to assess the players and the upcoming opposition, it remains to be seen just how many changes are made.

With Ezri Konsa still suspended, the expectation is that Calum Chambers will keep his place in the side alongside Tyrone Mings in the heart of the Villa defence. That pair provide a good balance instead of forcing Kortney Hause into an unnatural role on the right-side of the centre-half pairing, while Lucas Digne and Matty Cash will likely continue in the full-back roles.

Jacob Ramsey and John McGinn are expected to keep their places despite disappointing displays last time out, as the quality that they possess will mean they will be key in this encounter. The big change that would make sense is in the defensive midfield role, with Morgan Sanson coming in to replace Douglas Luiz.

Villa lack bite, physicality and an ability to impose ourselves on games in midfield, as well as controlling both possession and the tempo for long periods.

Sanson has the attributes to help address that, and while he’s not a natural deeper-lying midfielder, he has the characteristics that should allow him to adapt and get a long-awaited chance to impress again.

Luiz has too many limitations in the defensive side of his game, and it is hurting Villa time and time again.

Philippe Coutinho and Emiliano Buendia should continue to provide creativity in the final third, with Buendia no doubt benefitting from a week to fully recover from that hip injury he sustained against Leeds, while the other big decision for Gerrard comes up front.

Ollie Watkins has now gone five league games without a goal, and while he’s come in for some unnecessary abuse from some fans in recent weeks, Villa need to play to his strengths instead of simply resorting to Danny Ings.

Asking the 26-year-old to keep coming short, hold the ball up and bring others into play is not the role best suited to him. With his pace, movement and positional awareness off the ball, the runs he makes into the channels and in behind defences stretches them, opens play up for his teammates and creates a dual threat for us.

If Ings comes in and is asked to perform the same role as Watkins, it’s difficult to see how the end result will be any different.

It’s time for Gerrard and Villa to keep their faith in Watkins, but make a pivotal tweak to our style of play in attack to ensure we get the best out of him in front of creative threats like Coutinho and Buendia. 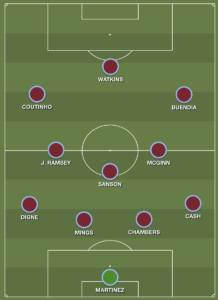