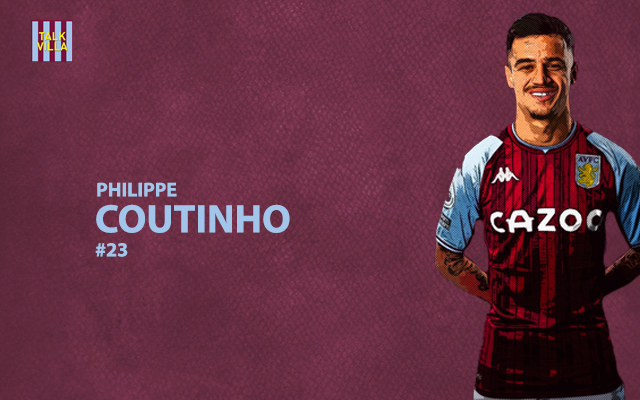 Aston Villa have officially announced that the club has signed Philippe Coutinho from Barcelona on a permanent basis.

Coutinho joined Villa from the Catalan giants in January on an initial loan deal, with an option included to make it a permanent switch.

The 29-year-old has contributed four goals and three assists in 16 Premier League appearances so far this season for Villa, and the club have evidently seen enough to be convinced to exercise that option and sign him permanently.

As per Villa’s official site, Coutinho has put pen to paper on a deal that runs until 2026, with Steven Gerrard unsurprisingly delighted with the news as he looks forward to working with the Brazilian international for the long term.

“This is a brilliant signing for Aston Villa. Phil is a model professional and his impact on the group has been very clear since he joined in January,” Gerrard said.

“With the way he conducts himself on and off the pitch, he’s also a valuable role model for our younger players who can only benefit from his experience.

“As we look to build towards next season, it is incredible to work at a club that executes its business so decisively and smoothly.”

Meanwhile, Barcelona have confirmed in their own official statement that the deal for Villa to sign Coutinho is worth €20m, while they have inserted a 50% sell-on clause for any future sale of the player.

It’s a crucial piece of business for Villa, as it sets the tone for the upcoming transfer window and it’s undoubtedly a big boost to get a big deal done early. There is no doubt that there are real benefits to having someone of Coutinho’s quality and experience in the squad, and hopefully the best from him is yet to come with a crucial pre-season in the bank too.

Aston Villa is delighted to announce the permanent signing of Philippe Coutinho from Barcelona for an undisclosed fee! 🙌