Aston Villa get our Premier League season underway with a trip to the Vitality Stadium on Saturday to face Bournemouth, and here’s how we could line up.

Facing a newly-promoted side on the road in the first game of the season is always going to be challenging, and so Steven Gerrard will no doubt be emphasising the importance of a strong start to the game from his players.

With a difficult atmosphere and a side looking to impress on their return to the top flight, the opening stages of the encounter will be crucial, and if we can get on top, silence the crowd and maintain some control over proceedings, it will certainly set us up well to come away with a positive result.

In order for that to happen, the first big thing Gerrard must get right is his Villa starting XI, and while a number of players look relatively assured of getting the nod, there are some key decisions that the Villa boss has to make this weekend.

Carlos, Kamara debuts and Bailey to get starting spot

Emiliano Martinez is expected to start between the posts, with Lucas Digne and Matty Cash filling the full-back roles.

With Gerrard noting in his press conference on Friday that Tyrone Mings and Calum Chambers were limited over the past week with a slight knock and illness respectively, they may be doubts to start the game even though they are confirmed as being available for selection.

Taking that into consideration, Diego Carlos could be partnered by Ezri Konsa in the heart of the Villa defence, with the pair both getting plenty of minutes in the latter part of pre-season and so they should be fully fit and sharp ahead of this game.

In midfield, Boubacar Kamara will also make his competitive Villa debut as well as Carlos, with Jacob Ramsey and John McGinn likely to start to complete the three-man midfield.

Douglas Luiz will be in contention and so much will depend on whether Gerrard believes we need more possession and control with the Brazilian or more penetration and movement from Ramsey, and so that could be one change.

After an excellent pre-season run, Leon Bailey will hope he has played his way into the starting XI with the Jamaican international adding much-needed pace and directness to our play to provide a different dynamic in the final third.

Philippe Coutinho is likely to start too, especially with Emiliano Buendia also a doubt to start after struggling with a knock this past week, while Ollie Watkins will hope to lead the line having done so on a number of occasions this summer.

Danny Ings will hope to displace him, as will Cameron Archer, but the pair may well need to settle for a place on the bench initially given Watkins’ ability to provide work-rate and pressure on the opposition defence with his tireless work ethic.

It’s a strong Villa line-up and with the depth that we now have in the squad, Gerrard will have plenty of options on the bench if needed to try and change the game in our favour. As noted above though, the start is pivotal and we must be ready to deal with that initial wave of Bournemouth pressure and take the game away from them after getting through it. 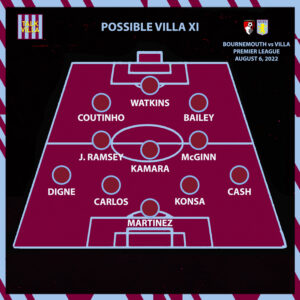