Aston Villa face Walsall in a pre-season friendly on Saturday as Steven Gerrard prepares his squad for the upcoming campaign.

Villa had a busy start to the transfer window with several key signings made, but the more recent focus has seemingly been on trimming the squad and agreeing new contracts with some of the top young talents at the club.

With several players given an extended break after their international exploits following the conclusion of the previous season, Gerrard will be without a number of key figures for the clash with Walsall, but that opens up opportunities for others to impress and make an impression on the Villa boss.

At this early stage of pre-season, the players will primarily be thinking about building fitness and avoiding injury, but there is no doubt that a positive run of results in the coming weeks will certainly help us build confidence and belief heading into our Premier League opener against Bournemouth on August 6.

So, how could Villa line up against Walsall this weekend, and who might feature off the bench?

Emiliano Martinez, Matty Cash, Lucas Digne and Boubacar Kamara have all posted on social media to reveal that they’ve already arrived in Australia, and so they will play no part this Saturday, and neither will those involved in internationals following the end of last season.

In turn, that means Philippe Coutinho, John McGinn, Carney Chukwuemeka, Jacob Ramsey, Tim Iroegbunam and Keinan Davis [playoffs with Nottingham Forest] will all be absent, but there is still plenty of quality and depth at Gerrard’s disposal to put out a strong XI and have numerous options off the bench to make sweeping changes in the second half.

As seen in the graphic below, Diego Carlos will hopefully get the full 90 minutes to acclimatise and build up some understanding and chemistry with his new teammates, while youngsters Kaine Kesler Hayden and Cameron Archer will ideally get a lengthy outing to try and stake their claim for a bigger role at Villa this season.

Elsewhere, Gerrard could go with his strongest possible line-up, but Danny Ings, Leon Bailey, Anwar El Ghazi, Bertrand Traore, Frederic Guilbert and Calum Chambers will all hope to be involved at some point, while young talents such as Ben Chrisene, Arjan Raikhy, Jaden Philogene-Bidace and Tommi O’Reilly have been training with the first-team this week and will also be in contention.

This will be seen as an opportunity for Gerrard to have a look at some players who may or may not form part of his plans this season, rather than going with individuals who he knows will be important pieces for him.

Building an identity, direction and style with more of the obvious starters will come in Australia with a full squad to choose from, and so Saturday will hopefully be a chance for others to impress and give the Villa boss something to think about as we get stuck into our preparations for the new campaign. 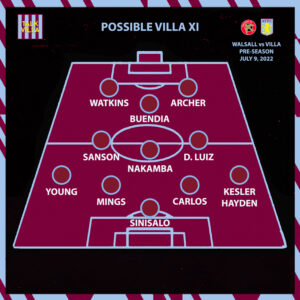