Aston Villa suffered a 2-1 defeat to Tottenham on Sunday in a disappointing overall performance heading into the international break.

Pierre-Emile Højbjerg gave the hosts the lead in a scrappy encounter, and although Ollie Watkins drew us level, Heung-Min Son’s cross was diverted into the back of the net by Matt Targett just minutes later and that ultimately decided the game.

While Villa ultimately never got going and lacked any real quality or fluidity to our play, Dean Smith and the players will also be disappointed with the manner in which we conceded the two goals.

Having kept back-to-back clean sheets in the Premier League prior to this clash, in wins over Everton and Man Utd, it felt as though we were perhaps getting back to our best defensively.

While the goals below were poor ones to concede, it was the inability to control the tempo and possession in midfield that was particularly costly, as we never really got a proper foothold in the game to put pressure on Tottenham consistently and test them.

That said, we have to do better, particularly away from home, in keeping the ball and being organised when teams transition quickly and attack our backline.

As seen in both images below, Villa were caught out for both goals as the defence was disjointed and lost its shape, as we were either overrun on one side or committed too many players across to leave the two Spurs players heavily involved in the goals too much time and space to cause damage. 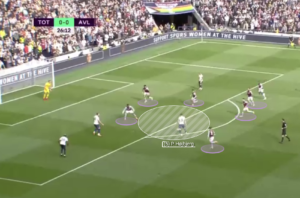 For the first goal, Hojbjerg is not only in too much space himself which allows him to settle himself before stroking the ball into the back of the net with a fine finish, but he has two teammates on the left flank unmarked too.

This all started with Spurs winning possession in midfield and breaking on Villa, and so while it’s expected that we’d be in trouble in this situation, it was clear that we have to look after the ball better in that area to avoid these situations from arising in the first place. 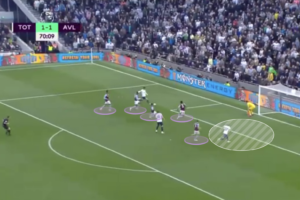 Meanwhile, for the second, Son deserves credit for his play in the build up, but again, Villa have committed too many men across and vacate a big space in the box.

Tyrone Mings is unable to cut the delivery out, and while Matt Targett tries his best to deny Lucas Moura, he ends up diverting the ball into the back of the net for an own goal.

Villa have numbers back for this one, but perhaps having just scored and over-committed as the game opened up and we felt as though we could go through the gears to get another, we left ourselves exposed at the back and ultimately suffered defeat.

The little details make the difference at the top level against top opposition. Villa and Smith will no doubt study and learn from the defeat and be better for it, but in our search of consistency and to compete with the top teams regularly, we have to be more commanding, composed and organised to keep our shape and avoid conceding damaging goals.