Steven Gerrard will prepare his Aston Villa side for a difficult test against Liverpool on Saturday, as he looks for three points on his return to his former club.

The Villa boss wrote his name into the history books at Anfield over the course of a glittering career with the Merseyside giants, but as he reiterated last weekend after the win over Leicester, he is fully focused on going to Anfield and winning with Villa.

READ MORE: How Watkins has stepped up to lead Villa line for Gerrard

Naturally, it won’t be easy to return home with a positive result given the quality that Liverpool possess with Jurgen Klopp looking to win more major honours this season, but having shown we could compete with Man City and having taken nine points from 12 under Gerrard thus far, we’re certainly going to Anfield in confident mood.

It’s another thing entirely though transforming that into a performance, and so it will be interesting to see if Gerrard opts to make any changes, as ultimately it could very well be a case of the old adage of ‘if it isn’t broken, don’t fix it’.

As seen in the club’s photos of training on Thursday, both Danny Ings and Matt Targett were involved with the rest of the group after recovering from knocks, and so it remains to be seen if they come straight back into the starting XI, or perhaps more sensibly, are on the bench and called into action if needed.

Having secured all three points against Leicester, it seems probable that Gerrard will stick with the same line-up to go out and get a result in this one, with Emiliano Martinez, Matty Cash, Ezri Konsa, Tyrone Mings and Ashley Young forming the back five as we have tightened things up in defence and look much harder to beat.

In midfield, we’ll need the energy and industry of John McGinn and Marvelous Nakamba to come to the fore if we have any chance of putting Liverpool under pressure and controlling the game as much as possible, while Douglas Luiz’s technical quality will be key in maintaining possession and setting the tempo.

Jacob Ramsey and Emiliano Buendia could flank Ollie Watkins, with that front three more than willing to put in the hard yards defensively and to track back to help out their teammates, while maintaining a goalscoring threat in transition and on the counter attack too.

That seems like the most balanced and suitable XI for this particular game, although the likes of Morgan Sanson, Carney Chukwuemeka and Anwar El Ghazi will be itching to get a chance of a bigger role having impressed off the bench in recent outings.

Nevertheless, this isn’t a game where you make a potentially risky decision in terms of fitness or a tactically wrong choice, and so it would come as no surprise if Gerrard sticks with the same line-up that won last time out. He’ll certainly be thrilled to have Targett and Ings on the bench though to add experience and seniority to the mix having been dominated by youth last weekend. 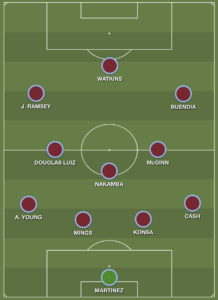