Aston Villa travel to Old Trafford on Monday night to face Man Utd in the third round of the FA Cup.

It’s a difficult draw for Steven Gerrard’s men, and the former Liverpool captain will no doubt be able to look forward to an interesting reception on his return to their fierce rivals.

READ MORE: Why Coutinho would be major coup for Villa if deal can be done

Nevertheless, his full focus will be on putting his players in the best position possible to go out and win the game, and ultimately advance in the FA Cup and keep our hopes of winning some silverware this season alive.

Villa will be buoyed by our win in the league at Old Trafford earlier this season, and so there should be added belief and confidence that we can indeed overcome Man Utd and get the desired result, particularly given that they aren’t in the best of form currently.

That said, there is still real quality running through their entire side, and so we’ll certainly have to be at our best to ensure we prevail.

Mings to return, Sanson gets nod in Villa XI

After missing the defeat to Brentford through suspension, Villa are likely to welcome captain Tyrone Mings back into the starting XI for this one, the first of two meetings with Man Utd in the space of a week.

His presence was missed in that loss, and so it’s hoped that he can return and add to the defensive solidity at the back as having conceded five goals in our last two outings, we need to start shoring things up at that end of the pitch again.

Meanwhile, Morgan Sanson will be pushing to get another starting spot after impressing against Chelsea last month, and this would seemingly be an ideal opportunity for Gerrard to get the Frenchman back out and improving his fitness.

The rest of the side in those two areas arguably picks itself, as Villa will want to be as close to full strength as possible in order to get the better of the opposition and put together a Cup run.

However, there is perhaps less certainty further up the pitch, as with Gerrard confirming that Ollie Watkins would resume full training on Saturday, that puts him back in the fold after also being absent for that defeat at Brentford.

Time will tell if Gerrard goes with both Watkins and Ings up front, or perhaps one drifting in from the left, or if Jacob Ramsey is handed a more advanced role on the left flank with Emiliano Buendia providing balance and a threat of his own on the right side.

It’s an interesting decision for the Villa boss, particularly given the Watkins-Ings partnership has struggled to get going, and while we’re likely to be under pressure and out of possession for large periods, having that extra work-rate and presence in midfield through Ramsey could be a key component in getting the win.

Nevertheless, it’s a good problem for Gerrard to have, and he’ll have an even tougher time picking his side in the not too distant future with Leon Bailey pushing to return from injury, while new signing Philippe Coutinho could be in contention for the league encounter with Man Utd next weekend as he eyes his Villa debut having joined in a loan deal from Barcelona on Friday. 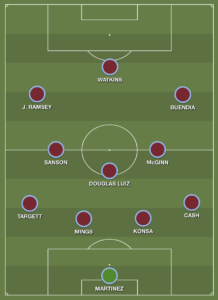