Aston Villa are reportedly edging closer to securing the signing of Emiliano Buendia from Norwich City as we look to bolster our attacking options this summer.

As per BBC Sport, Villa have agreed a deal to sign the Argentine international worth around £33m initially, while personal terms are also said to have been agreed and a medical completed.

In turn, it would appear that the 24-year-old is on the verge of a move to Villa Park, as he looks to build on an impressive campaign for Norwich last year as he played an integral role in their promotion from the Championship.

A priority for Villa this summer was to improve our attacking options given the heavy burden and responsibility on Jack Grealish’s shoulders, with a lack of creativity hurting us in the second half of the campaign last season with our influential playmaker sidelined by injury.

With that in mind, a move for Buendia would certainly help address that after he registered 15 goals and 17 assists in 41 appearances last season, and coupled with the other attacking players we have in the squad, it makes us a more dangerous proposition for our rivals.

Aside from the quality that he possesses, Buendia’s versatility will also be a huge boost for us as he can play in different positions and still be effective.

The Argentine international predominantly played on the right wing for Norwich last season, but as seen in many of his goals and assists, he was equally as influential when drifting inside into more of a No.10 role.

That will give us options in terms of playing him through the middle to support Ollie Watkins, who will no doubt continue to lead the line for Villa, with Grealish out on the left and Bertrand Traore continuing on the right side.

Alternatively, if Smith prefers to deploy Grealish in a more central position, Buendia can shift over to the right and the likes of Trezeguet, Anwar El Ghazi and Jacob Ramsey will be knocking on the door for a starting berth on the left flank instead.

It gives us different looks and different threats, and so while Watkins, Grealish and Buendia will likely be our starting trio in attack, there are several ways we can hurt the opposition both in terms of personnel and tactically if these talented individuals are offered freedom on the pitch.

The rest of the side picks itself currently as it remains to be seen if we opt to splash out on any further big signings, with Emiliano Martinez, Matty Cash, Ezri Konsa, Tyrone Mings and Matt Targett making up our backline.

John McGinn and Douglas Luiz could continue as the first-choice pairing in the deeper midfield roles, although they will face stiff competition too with Morgan Sanson and Marvelous Nakamba knocking on the door.

Our attacking quartet will also face the same challenge with not only the likes of El Ghazi, Trezeguet and Ramsey pushing them, but also with the possibility that Smith integrates more of our young stars after their FA Youth Cup success, which in term gives us depth, albeit perhaps inexperienced depth, off the bench.

Should we complete the signing of Buendia though as looks likely now, it is a major signing with a big price-tag. With that comes expectation and pressure, but the combination of the attacking players noted below could ensure we are a nightmare for opposition defences moving forward. 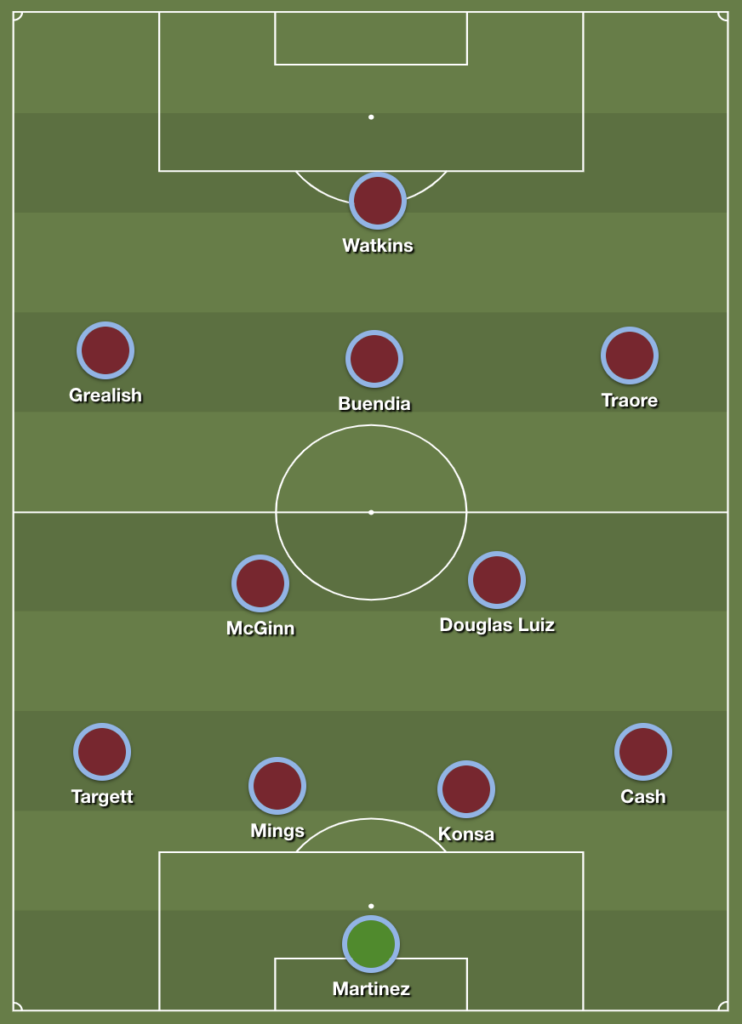