Losing our now former talisman is a major setback given his influence and what he brought to the side, and ultimately Villa were realistic and sensible in identifying that they couldn’t sign a direct replacement.

READ MORE: Why post-Grealish era has begun with smart, classy work from Villa

Instead, we’ve added three attacking players to fill the void and to replicate what Grealish brought to the side, thus also simultaneously ending our over-reliance on one player in the final third.

Villa now boast depth across the squad, although further additions are expected and so the starting XI and depth chart could yet change between now and the end of the current transfer window.

However, as seen in the graphic below, this could be one of the line-ups that we see more often than not from Dean Smith, with the flexibility and versatility from his players to change roles and switch in the attacking third to give the opposition a real headache.

Back five pick themselves

One of the major boosts for Smith this year is that the back five ultimately pick themselves when fit and in form.

Emiliano Martinez, fresh from equalling a club record for clean sheets in a single top-flight season as well as winning the Copa America over the summer, will continue between the posts, while Matty Cash, Ezri Konsa, Tyrone Mings and Matt Targett form the first-choice backline.

In Ashley Young, Villa have depth at left-back, albeit he’ll want to push his way into the starting XI, with Frederic Guilbert available at right-back. Kortney Hause is a natural option to step in for Tyrone Mings, but after Bjorn Engels left last month, Villa still need a right-sided centre-half to cover for Ezri Konsa.

Should Villa continue with a two-man pivot in a deeper midfield duo, Douglas Luiz and John McGinn, when fully fit and confident, will arguably be named on the teamsheet as first choice.

Marvelous Nakamba has proven his ability to step in and be a reliable option, particularly when Smith wishes to have a bit more defensive cover in front of the backline, while Conor Hourihane is still available to him as things stand.

Morgan Sanson could look to alter his role slightly given the fierce competition for places further up the pitch, while it remains to be seen where Jacob Ramsey fits in too as the pair could have more joy if we switch to a 4-3-3 system.

With the additions made this summer, one thing that seems fairly certain is that Wesley and Keinan Davis are set to fall down the pecking order, and both could eventually be loaned out during the course of the campaign.

Bertrand Traore and Anwar El Ghazi both showed their class last year and will have no desire to drop out, but ultimately given the money spent and the quality of our new signings, the expectation is that they will be battling to get into the side, should our new boys hit the ground running and impress.

Leon Bailey arguably played his best football for Bayer Leverkusen cutting in from the right side, while Emiliano Buendia also enjoyed success in that role but can also play through the middle as a No.10. As seen with his link up with Ollie Watkins in pre-season against Walsall, the pair could relish that opportunity to build on their partnership and understanding in the final third.

That leaves a conundrum over where Watkins and Danny Ings fit in, either together or perhaps Smith will go with one or the other and look for the competition to bring out the best in both.

Watkins showed he can play out on the left for Brentford, but such was his influence and class up top for us last season, both on and off the ball, it would surely be a shame to see him moved away from the centre-forward position.

In turn, we could see some real flexibility and versatility up top with Watkins, Ings, Buendia and Bailey all moving around and interchanging, and that is certainly something Smith will be working on in training ahead of the upcoming campaign.

The XI below is just one of the options at Smith’s disposal, as he now has the personnel to change it when he sees fit. Naturally, we’ll all have our opinion on what is the best system and players, while not forgetting that the likes of Carney Chukwuemeka and Jaden Philogene-Bidace will hope to make their mark this season too and force their way into the starting XI. 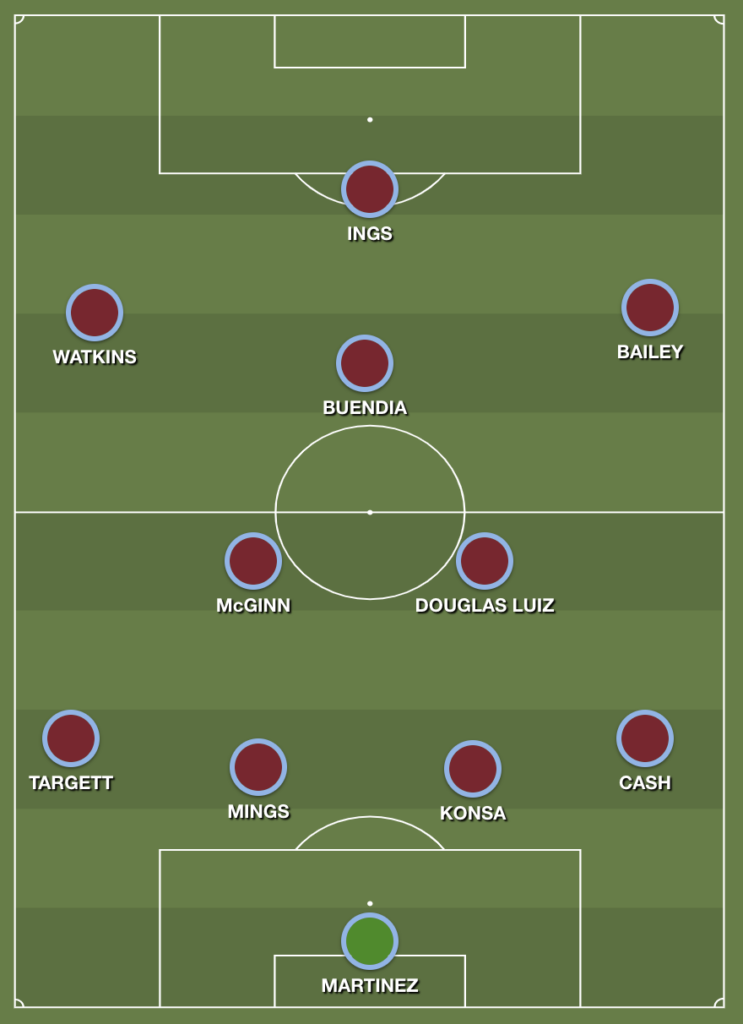